In this post we’re going to compare two robust dependent correlation coefficients using a frequentist approach. The approach boils down to computing a confidence interval for the difference between correlations. There are several solutions to this problem, and we’re going to focus on what is probably the simplest one, using a percentile bootstrap, as described in Wilcox 2016 & implemented in his R functions twoDcorR() and twoDNOV(). These two functions correspond to two cases:

Case 1 corresponds to the common scenario in which we look for correlations, across participants, between one behavioural measurement and activity in several brain areas. For instance, we could look at correlations between percent correct in one task and brain activity in two regions of interest (e.g. parietal and occipital). In this scenario, often papers report a significant brain-behaviour correlation in one brain area, and a non-significant correlation in another brain area. Stopping the analyses at that stage leads to a common interaction fallacy: because correlation 1 is statistically significant and correlation 2 is not does not mean that the two correlations differ (Nieuwenhuis et al. 2011). The interaction fallacy is also covered in a post by Jan Vanhove. Thom Baguley also provides R code to compare correlations, as well as a cautionary note about using correlations at all.

To compare the two correlation coefficients, we proceed like this:

A Matlab script implementing the procedure is on github. To run the code you will need the Robust Correlation Toolbox. First we generate data and illustrate them.

The bootstrap distribution of the differences between correlation coefficients is illustrated below. 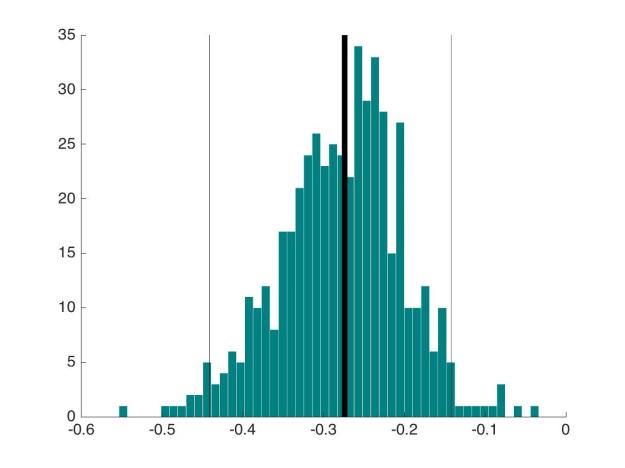 The bootstrap distribution does not overlap with zero, our null hypothesis. In that case the p value is exactly zero, which is calculated like this:

Case 2 corresponds to a before-after scenario. For instance the same participants are tested before and after an intervention, such as a training procedure. On each occasion, we compute a correlation, say between brain activity and behaviour, and we want to know if that correlation changes following the intervention.

This case 2 is addressed using a straightforward modification of case 1. Here are example data: 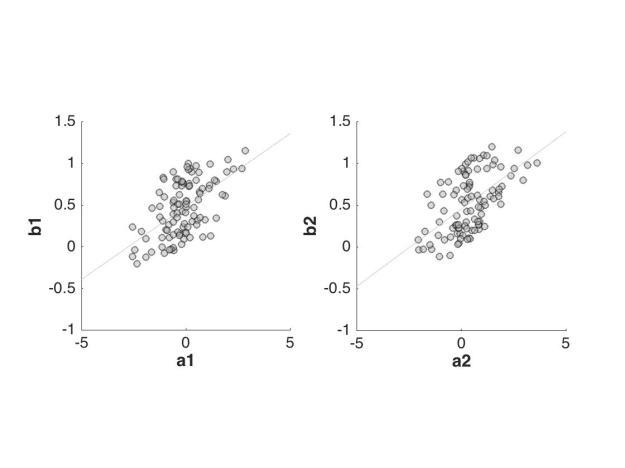 The difference is very close to zero and its confidence interval includes zero. So the training procedure is associated with a very weak change in correlation.

Instead of a confidence interval, we could also report a highest density interval, which will be very close to the confidence interval if the bootstrap distribution is symmetric – the Matlab script on github shows how to compute a HDI. We could also simply report the difference and its bootstrap distribution. This provides a good summary of the uncertainty we have about the difference, without committing to a binary description of the results as significant or not. 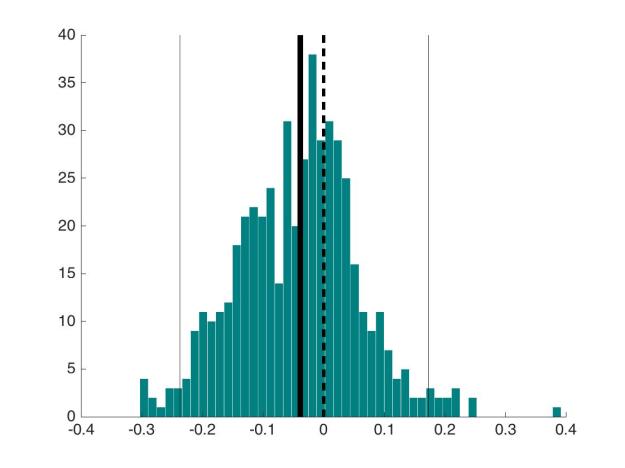 Let’s consider a simple mixed ERP design with 2 repeated measures (2 tasks) and 2 independent groups of participants (young and older participants). The Matlab code and the data are available on github. The data are time-courses of mutual information, with one vector time-course per participant and task. These results are preliminary and have not been published yet, but you can get an idea of how we use mutual information in the lab in recent publications (Ince et al. 2016a, 2016b; Rousselet et al. 2014). The code and illustrations presented in the rest of the post are not specific to mutual information.

Our 2 x 2 experimental design could be analysed using the LIMO EEG toolbox for instance, by computing a 2 x 2 ANOVA at every time point, and correcting for multiple comparisons using cluster based bootstrap statistics (Pernet et al. 2011, 2015). LIMO EEG has been used to investigate task effects for instance (Rousselet et al. 2011). But here, instead of ANOVAs, I’d like to focus on graphical representations and non-parametric assessment of our simple group design, to focus on effect sizes and to demonstrate how a few figures can tell a rich data-driven story.

First, we illustrate the 4 cells of our design. Figure 1 shows separately each group and each task: in each cell all participants are superimposed using thin coloured lines. We can immediately see large differences among participants and between groups, with overall smaller effects (mutual information) in older participants. There also seems to be task differences, in particular in young participants, which tend to present more sustained effects past 200 ms in the expressive task than the gender task.

To complement the individual traces, we can add measures of central tendency. The mean is shown with a thick green line, the median with a thick black line. See how the mean can be biased compared to the median in the presence of extreme values. The median was calculated using the Harrell-Davis estimator of the 50th quantile. To illustrate the group median with a measure of uncertainty, we can add a 95% percentile bootstrap confidence interval for instance (Figure 2).

We can immediately see discrepancies between the median time-courses and their confidence intervals on the one hand, and the individual time-courses on the other hand. There are indeed many distributions of participants that can lead to the same average time-course. That’s why it is essential to show individual results, at least in some illustrations.

In our 2 x 2 design, we now have 3 aspects to consider: group differences, task differences and their interactions. We illustrate them in turn.

Age group differences for each task

We can look at the group differences in each task separately, as shown in Figure 3. The medians of each group is shown with 95% percentile bootstrap confidence intervals. On average, older participants tend to have weaker mutual information than young participants – less than half around 100-200 ms post-stimulus. This will need to be better quantified, for instance by reporting the median of all pairwise differences.

Under each panel showing the median + CI for each group, we plot the time-course of the group differences (young-older), with a confidence interval. For group comparisons we cannot illustrate individuals, because participants are be paired. However, we can illustrate all the bootstrap samples, shown in grey. Each sample was obtained by:

The lower panels of Figure 3 reveal relatively large group differences in a narrow window within 200 ms. The effect also appears to be stronger in the expressive task. Technically, one could also say that the effects are statistically significant, in a frequentist sense, when the 95% confidence intervals do not include zero. But not much is gained from that because some effects are large and others are small. Correction for multiple comparisons would also be required.

Task differences for each group

Figure 4 has a similar layout to Figure 3, now focusing on the task differences. The top panels suggest that the group medians don’t differ much between tasks, except maybe in young participants around 300-500 ms.

[1] When the mean is used as a measure of central tendency, these two perspectives are identical, because the difference between two means is the same as the mean of the pairwise differences. However, this is not the case for the median: the difference between medians is not the same as the median of the differences. Because we are interested in effect sizes, it is more informative to report descriptive statistics of the pairwise differences. The advantage of the Matlab code provided with this post is that instead of looking at the median, we can also look at other quantiles, thus getting a better picture of the strength of the effects.

Interaction between tasks and groups

Finally, in Figure 5 we consider the interactions between task and group factors. To do that we first superimpose the medians of the task differences with their confidence intervals (top panel). These traces are the same shown in the bottom panels of Figure 4. I can’t say I’m very happy with the top panel of Figure 5 because the two traces are difficult to compare. Essentially the don’t seem to differ much, except maybe for the late effect in young participants being higher than what is observed in older participants.

In the lower panel of Figure 5 we illustrate the age group differences (young – older) between the medians of the pairwise task differences. Again confidence intervals are also provided, along with the original bootstrap samples. Overall, there is very little evidence for a 2 x 2 interaction, suggesting that the age group differences are fairly stable across tasks. Put another way, the weak task effects don’t appear to change much in the two age groups.